Which major banks are the worst-reviewed in the UK?

The safety of our hard-earned money is of paramount importance, with millions of dollars and pounds deposited by customers each day, and the banking industry itself is worth trillions.

Since there has been a concept of civilisation and currency in the world, the idea of banking has quickly followed. Historians believe that the concept of banking began as far back as 2000 BCE in ancient Babylonia, and throughout the subsequent epochs the practice has developed into the multinational huge investment banks that we see today, while there’s also an increasing focus on the safety of other forms of currency such as crypto.

Despite the importance of banks and our dependence on them, they have not always delivered for us in the way we would like them to, gambling savings on investments that do not always work out. For instance, banks contributed to the 2007 housing crisis with CDOs, subsequently causing the crash which crippled the entire world economy.

On a less cataclysmic level, we wanted to discover which banks are not meeting their customers’ needs. By looking at online reviews of major banks entrusted with the hard earned money of British citizens.

The worst and best banks in the UK 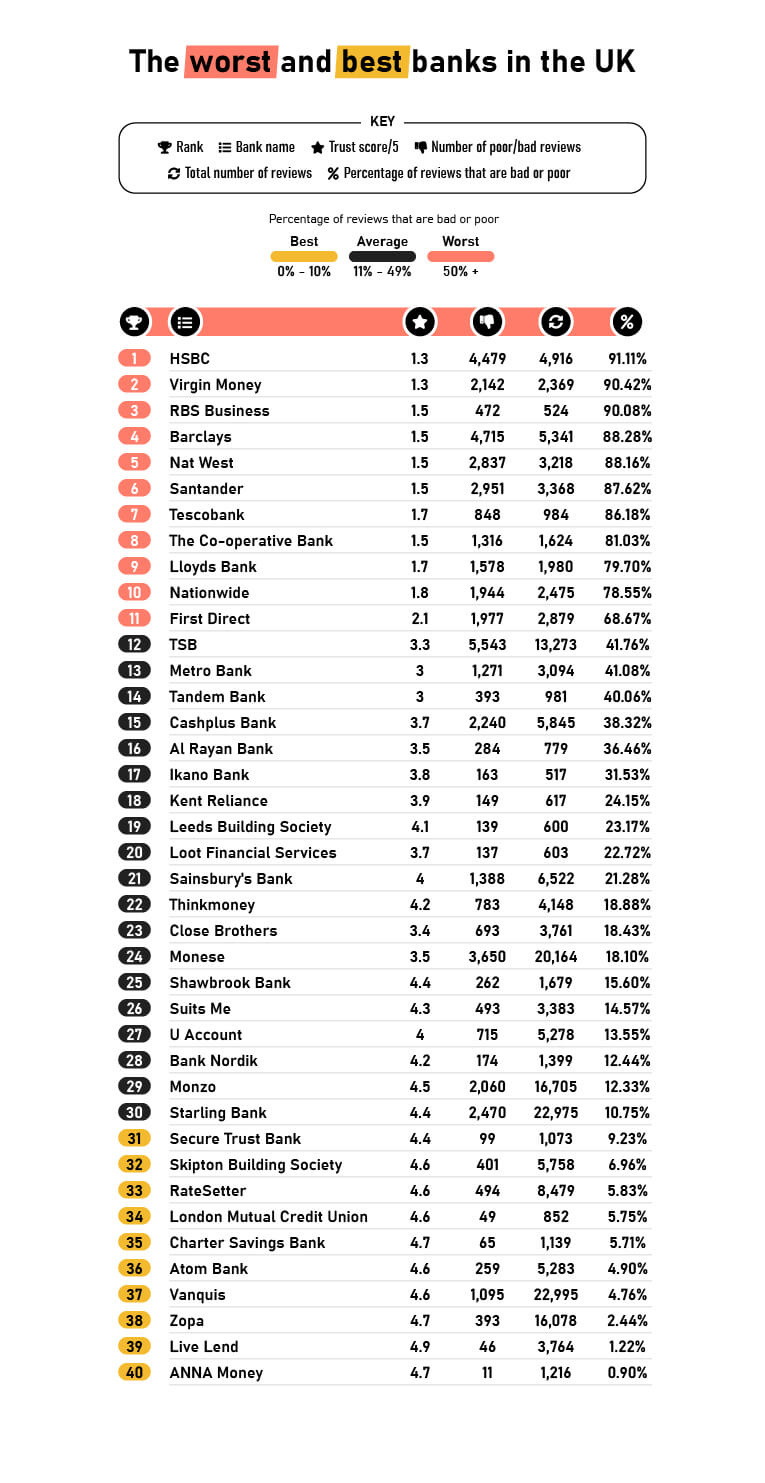 To determine the worst-reviewed banks in the UK we looked at online reviews for banks and building societies on Trustpilot. The number of customers that gave the bank a ‘bad’ or ‘poor’ review has been totalled and compared with the total number of reviews to discover the percentage of customer reviews that were not satisfied with the bank. 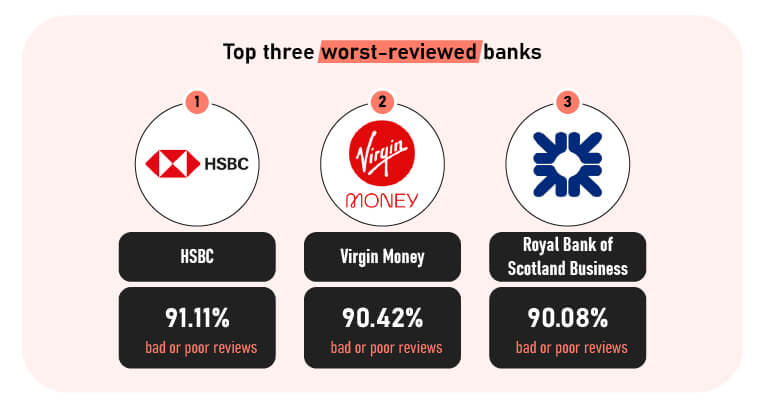 HSBC is marketed as the world’s local bank, but now they also have the auspicious title of the worst reviewed bank in the UK, with an incredibly poor score. Over 90% of the online reviews came in as bad or poor, 4,479 from a total of 4,916. HSBC reportedly has 15 million UK customers, which could mean over 13.5 million people are not happy with the bank.

Despite HSBC having so many customers, it appears that they are not the best at dealing with them. Even a cursory glance at their reviews on Trustpilot shows a clear lack of good quality customer service, with reviewers bemoaning difficulty of getting in touch with the bank either over the phone or through online channels.

Here’s what some of HSBC’s one-star reviewers had to say:

One of the UK’s more recently founded major banks is Virgin Money, founded in the mid-’90s by Richard Branson, but it was not until after the 2008 financial crash that they became a fully-fledged high street bank. Unfortunately, in that short period of time, they have managed to incur a massively high rate of bad or poor reviews; 2,142 from 2,369 total reviews.

Virgin Money’s bad reviews often seem to complain about the lack of communication from the bank, with customers struggling to get hold of staff or find the information they are looking for. Other complaints include how long it takes the bank to process customer requests and enquiries, as well as pointing out a multitude of technical issues with their website and app.

The third worst-reviewed major bank in the UK was RBS, making it one of the trio to have over 90% of its reviews being negative. The Edinburgh based bank is close to celebrating its 300th birthday, but this big number is not as big as the number of bad reviews. From a much lower total of 524 reviews for RBS Business, an incredibly high 472 of them were bad or poor.

Like our other low-scoring banks, RBS seems to have attracted a lot of attention for its poor customer service, with many customers venting their frustrations on Trustpilot. This lack of customer care appears to have led to a level of mistrust coming to the service, with several particularly put-out customers calling them out for “broken promises” and “totally clueless” staff.

A few snippets of these negative reviews can be seen below: 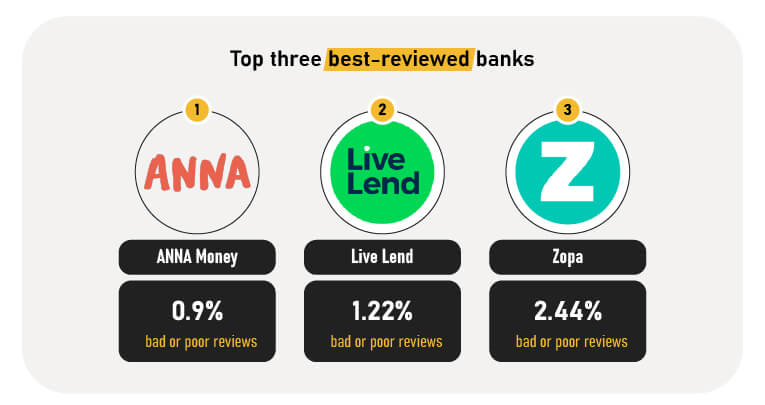 ANNA, or Absolutely No Nonsense Admin to give them their full title offer bank accounts for small businesses. Since their founding five years ago they have been received positively by their customers as, in total, only 11 people gave them a bad or poor review from a total of 1,216.

In contrast to some of the older, more traditional banks, ANNA Money seems to be doing very well both in terms of customer service and ease of use, with their banking app receiving multiple positive reviews on Trustpilot.

Here’s what some of ANNA’s happy customers had to say:

The second best reviewed UK bank is Live Lend, a Wrexham-based company that specialises in loans to customers. In total Live Lend had 3,764 reviews, and only 46 of them were bad or poor.

Live Lend’s incredibly positive overall score is in large part due to the bank’s speed with which they deal with customer’s enquiries and applications. Customers also expressed a high satisfaction with how easy it is to use this bank, which is not something that many retail banks can claim.

Some of Live Lends positive reviews have been highlighted below:

Although Zopa was founded in 2005 it took a further fifteen years for them to become a full on bank, operating out of London the bank is now the third best reviewed major bank in the UK. In total there were 3,764 reviews, and only 44 were bad or poor.

Like the other young banks that scored highly, Zopa has quickly built a reputation for being an easy company to deal with as a customer, receiving review after review praising their excellent customer service and ease of use.

Here are a few excerpts from reviews of happy Zopa customers: