Bitcoin Surged By 11% In Two Hours | End of the Pull-Back in BTC? 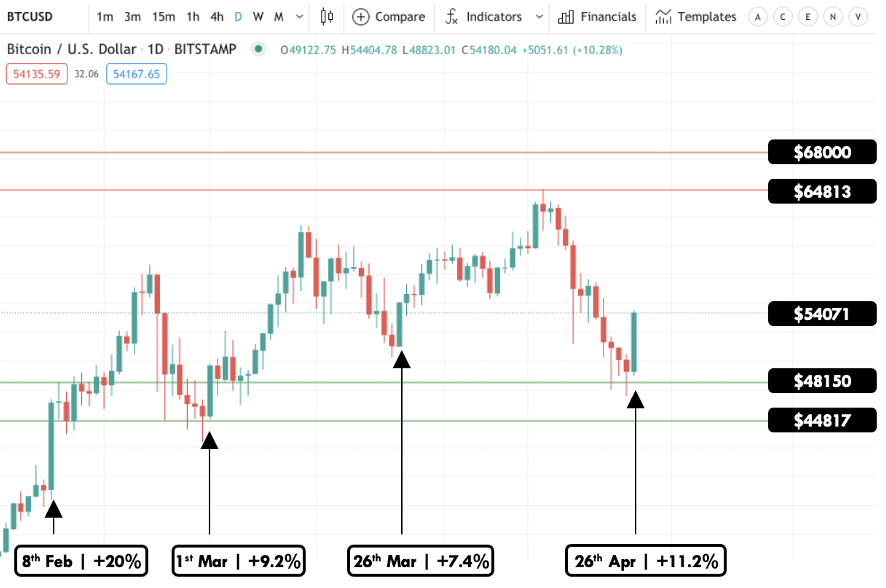 After ending the weekend with uninteresting price movements and zero buyer momentum, Bitcoin (BTC) bounced back in style. Bitcoin has shown a growth of 11.2% today after experiencing a strong pullback of 22% for the past ten days. The price broke all the minor resistance levels, like $50k and $51,116, to reach the 54,000 mark. In this article, let’s understand the reasons for this price surge, explore the expert opinions and perform technical analysis of the BTC/USD pair.

At the time of writing, the price of Bitcoin (BTC) was hovering around $54,000. The support and resistance levels on the daily timeframe for this crypto are at $48,150 and $58,300, respectively. During the early hours of Monday, the price took support from the $48,150 level to surge by over 11% in a matter of hours. This double-digit price rise is the most this crypto has shown for the past two months. Expert predictions are optimistic about Bitcoin price action, with many of them forecasting a higher high in the short term.

The next immediate target for the Bitcoin price is to test the $58k resistance level. If the price fails to make a higher high, it could shoot back to the daily support before going to the north. But if the buyer momentum is strong, the next target would be its current all-time high value at $64,813. The weekly timeframe support level is at $44817, and the next round number resistance is at $68k. With buyers taking over, technical analysts predict the redemption of the bull market in the BTC/USD pair.

Is Bitcoin overdue for a big bounce? Experts say YES!

Talking about the recent turn of events in the Bitcoin price action, Raoul Pal – founder of Real Vision Group and Global Macro Investor, tweeted that Bitcoin was as oversold as it was in the first week of March. Bitcoin has surged by over 45% since the beginning of March. Therefore, his statement means that Bitcoin could still go further, making double-digit growths with healthy pullbacks.

Replying to the same tweet, he supported this statement by backing his analysis using the Relative Strength Index indicator. According to him, the weekly RSI levels right now on the BTC/USD pair are pretty close to the RSI levels that we saw during the pullbacks we experienced in the 2017 bull run. Right after that, we saw Bitcoin shooting to the north, creating a sensational all-time high value. Pal concluded his statement by saying that the recent BTC price dip is nothing but a pause that refreshes the current bull market.

What caused the Bitcoin rally on Monday?

There could be many reasons for the sudden surge in BTC’s price on Monday. One of the significant reasons could be the signs of increased industrial adoption of Bitcoin. JPMorgan, one of the most prominent investment banks in the world, states that they could launch a proprietary Bitcoin fund for its high-net-worth clients. With this, JPMorgan Chase becomes the largest and first mega-bank to classify crypto as an asset class. According to the latest reports, NYDIG (popularly known as an institutional Bitcoin shop) plans to be the custody provider for JPMorgan in this regard.

Despite the surge, Bitcoin prices got shed by about 26% in the past two weeks. From reaching an all-time high value at $64,800, the price shot down to $54k, and this downtrend took a hit on BTC’s dominance in the crypto market. Currently, this number stands at 50.01% and the last time Bitcoin’s market share fell below 50% was in the third quarter of 2018. Bitcoin must maintain its prices above the 53,800 mark to be classified as a trillion-dollar asset with its current supply.

We are very bullish on Bitcoin, considering all the factors mentioned above. If you are willing to be a market entrant or interested in expanding your portfolio, jump in the train by buying Bitcoin easily on our exchange list. You can buy them instantly and for the best price market got to offer. All the best.