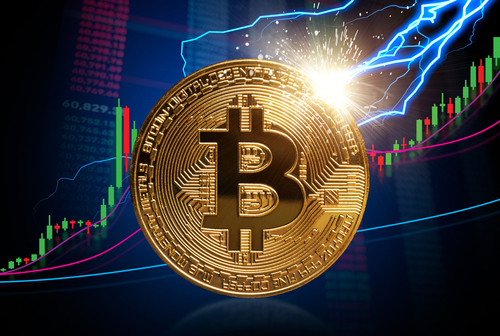 As the globe’s largest asset has made a massive rise with the onset of October, the cryptocurrency market has finally shifted to the upside. Crypto prices, particularly Bitcoin, which had been struggling to hold support levels over the previous month, have made a turn.

When the whole crypto market collapsed in September, Bitcoin was one of the hardest affected cryptos. With the market’s price movement was out of line with certain important fundamental indications that indicated bullishness in Bitcoin, the extended drop seemed strange. This was also the case with Ethereum cryptocurrency and many other popular cryptos assets. Nonetheless, unlike BTC, a few currencies gained support at greater levels during market bearishness.

The price volatility in the Bitcoin market is decreasing as the market is maturing with the rise in market cap. As a result, unlike altcoins, BTC’s typical percentage movement per day has significantly dropped.

The levels $44,000 and $40,800 have been a couple of key areas of focus for bidders during the rebound period. However, relying on the first push at the beginning of October, which made a significant move north in a single trading session, the volatility seems to have shifted. Of course, we cannot base it off on an individual move, but the prices have certainly been showing volatility every time the big players step up at their areas of interest.

For instance, the Bitcoin market, which usually fluctuates between 1-2 percent each day, experienced a massive uptick of 9% in a single session. As far as the reason is concerned, the big jump was caused by significant accumulation and severe short-squeeze at $41,000 levels. Hence, BTC presently trades at over $48,000.

It is fairly obvious that China has always been the epicenter of Bitcoin mining. However, the country’s ban on the use of mining nodes resulted in a significant drop in hashrate, a metric that measures the network’s total computing activity.

This year, in May, the hashrate, which had been hovering around 150 EH/s, plummeted quite considerably. However, after falling as low as 50 EH/s, the hashrate later stabilized at 100 EH/s. Despite China’s reiteration of its prohibition and the closure of the bulk of mining pools across the nation, the hashrate recently rose to 177.5 EH/s.

Despite China’s ban, the hashrate is rising to new all-time highs, indicating that miners are the least affected.

Week after week, the whole US Dollar group has been gaining momentum. As a result, conventional currencies, such as Gold, silver, and all other asset pairings versus the US dollar, have taken a hit. However, as the demand regions on higher intervals began to respond strongly, the USD reversed its trend on lower timeframes.

During the US Dollar’s depreciation, both Bitcoin (BTC) and Gold saw significant gains. However, when looking at the recovery of both assets from a correlation standpoint, Bitcoin has clearly outperformed the conventional safe-haven asset by a big margin.

In comparison, Bitcoin has clearly broken through the $44,500 barrier, but Gold has failed to break over its equivalent $1760 level of resistance, demonstrating that BTC displayed a stronger level of bullishness throughout its rebound vs. Gold.

The BTC market has been in a bearish trajectory ever since the sellers took over the game at $52,000. Starting from the end of the first week of Sept, the bears have been in charge of the price, leaving lower low and lower high sequences.

The factor that stood as a concern during the downtrend was the sellers’ impulsive moves to the south. After overextended consolidations (pullback), the market found a lower high a continued to push lower to make brand new lows.

But the trajectory has slightly changed amid the massive push from the buyers that came in at the recent support at $41,000. The change essentially was the absence of a lower high, which is a critical piece in a downtrend. Instead, the market made an equal high, showing that the buyers stepped up for real.

That being said, it is early to predict if the buyers are going to continue with the same price action. But if the market manages to leave a higher low and holds above $44,000, it can be concluded that the bulls are certainly back in action.

Now you can get Bitcoin and most of your other favorite cryptos from our list of popular and reliable cryptocurrency exchanges.