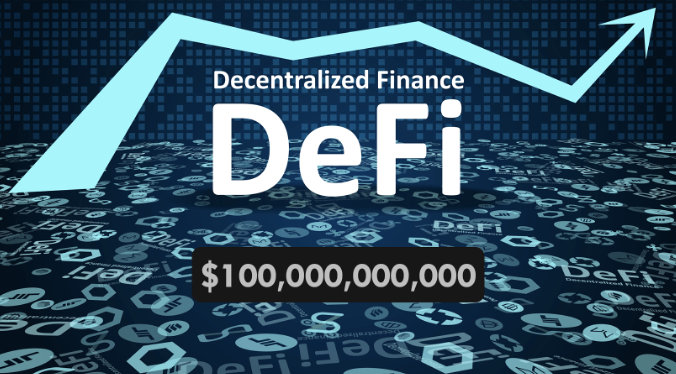 The Decentralised Finance (DeFi) sector that started off with a slow start is now rising exponentially in usage. As per CoinGecko’s estimates, the total market capitalisation of DeFi hit $128 billion, joining the $100 billion club sooner than expected. The industry that brings the traditional financial products, majorly including lending and borrowing in a decentralised manner, has indeed found an edge in the growing crypto ecosystem.

The market cap of DeFI shown below is a clear illustration of how this space is growing rapidly month on month.

Meanwhile, Coinbase was preparing to go public with an anticipation of a $100 billion valuation. The number did meet the expectations, but it seems to be underperforming in the market since its inception. Opening at around $430, it is currently trading at $290.

Coinbase, while filing to go public, listed DeFi as a potential competitor. The market cap comparison does go close, but this is not how the market cap is comprehended in the DeFi industry. There is over $100 billion worth of assets in the DeFi space locked up – referred to as Total Value Locked (TVL).

DeFi is keeping up the current numbers and rising with the entrance of the exchange giant Binance -The Binance Smart Chain (BSC). Though most value is locked on the Ethereum blockchain, the growth has been better on BSC.

Going by the market as calculated by CoinGecko, the DeFi coins that have made it to the four include –

Let’s dissect each of the markets and understand its price prospects.

The overall trend of UNI/USDT pair is north. The real growth in UNI began in 2021, where the price kept doubling biweekly. But the market slowed down since March, as some profit-taking came in.

If looked carefully, the market is still clearly dominated despite the presence of some bearish candlesticks. Though the sellers are trying to push to market lower – there was no instance or a set of lower lows and lower highs.

The pace of the uptrend has, of course, come down, but the bulls are still maintaining grounds leaving higher highs and higher lows.

Looking at the present price action, the market is at the top of the inclined channel. The lower timeframes do give indications that the sellers are making attempts to continue with another round of selling, but given the strength of the buyer – a higher low higher than the bottom of the channel is expected.

Like most altcoins, LINK/USDT also is dominated by buyers. It is currently trading at $38, about only 14% lower than the all-time highs. The LINK market is moving in a push-retracement trajectory.

After a long consolidation in 2020, the price finally breached through the Resistance at around $20 to make ATH in 2021. It was followed with the second phase of retracement, which was much shallow than the one in 2020, indicating that the buyers are being desperate psychologically and trying to maintain grounds.

As a result, the buyers did attempt to make another brand new ATH this month (April), for which they were partially successful. There are a couple of factors that do not give us certainty on the strength of the buyers –

– the most recent push is shorter than the previous one

– the retracement came in deep, beneath the Resistance turned support ($35)

Having that said, the present price action visually depicting the buyer holding above the support can lead the market to another ATH in continuation of the current trend.

The next DeFi coin, ranked 3rd, is CAKE. This new coin launched in the Binance Smart Chain has gained incredible traction since its inception. Typically, coins do not observe great liquidity since launch, but CAKE/USDT pair saw the opposite observation. Within months of its launch, the market cap has risen to almost $7 billion.

The price is growing like a hockey stick with over 69% in the last seven days – outperforming its competitors.

But does it possess an investment opportunity at the moment? We do not believe so. The market moves in a cycle. After a push, the market does go for a round of consolidation before making its new move. Hence, it is better off we wait for the market to drop for a discount rather than catching this running train.

Fourth on the list is Terra, with a market cap of $6.5 billion. LUNA/USDT token looks to be in an ideal bull market. The buyers have pushed the market over 350% since March 2021 and are keeping control to date.

The opposite party did step in after the gigantic push of the buyers – leaving lower lows and lower highs as shown. However, this month the big buyers resumed charge and breached through the lower high – making the first higher high. Thus, if higher lows begin to appear in the coming week, there is a high possibility for the buyer to shoot through the ATH of $22.

From the technicals of the top four DeFi coins, it is evident that the DeFi market is here to stay and stay strong. It would be of no surprise for the market cap of DeFi to hit $200 billion anytime soon, given the growing interest in the crypto space.

Have you purchased your DeFi coin yet? If not, get them instantly from our list of reliable exchanges. Cheer!