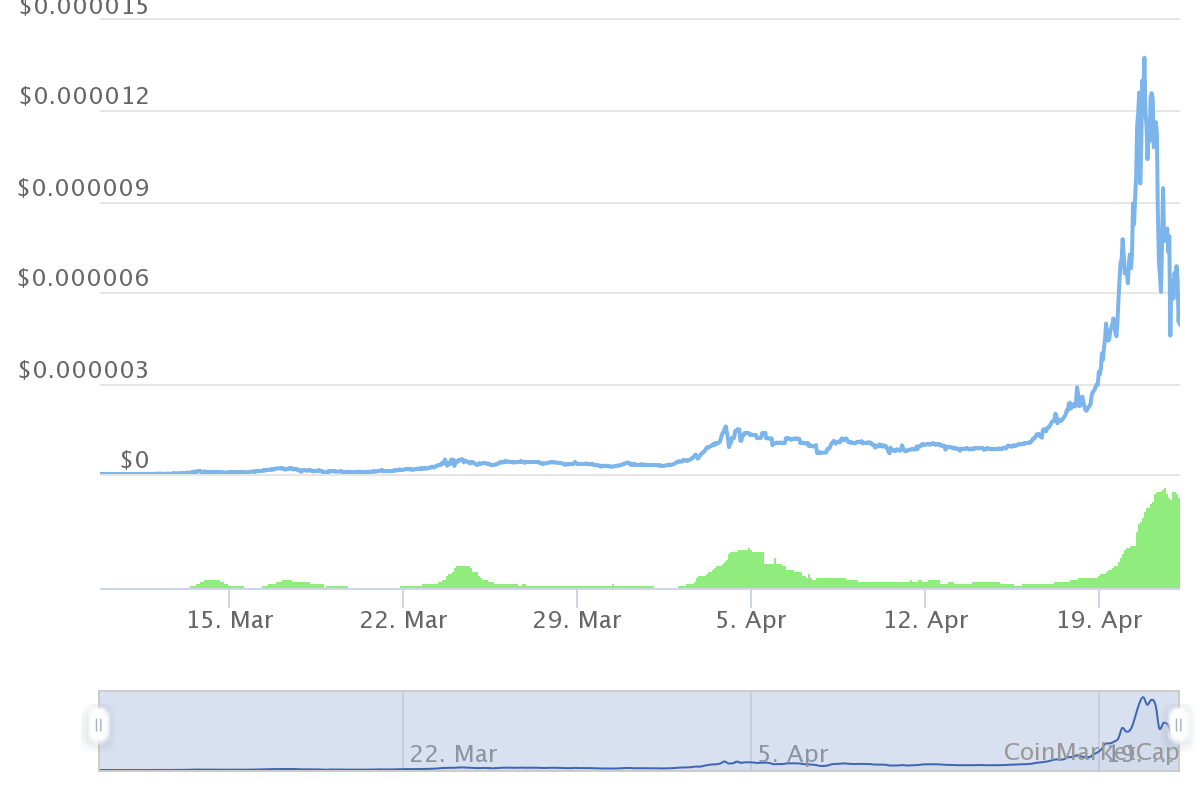 Decentralized finance and algorithmic trading are already well-established on the Binance Smart Chain, which is one of the alternatives to Ethereum-based DeFi. Pancake Swap, one of the new algorithmic exchanges, is already available to build liquidity tokens. There is a gold rush for a new type of token and projects are appearing almost daily, with the promises of high returns, but also high risks.

One of the recent projects, Safemoon (SAFEMOON), launched in March 2021. The project’s idea was to launch a rock-bottom priced token, starting from a few Satoshis. The current price of SAFEMOON is still a fraction of a penny, despite growing by a factor of 10,000 since its launch.

The recent popularity of the project even caused technical issues with the Binance Coin protocol, which is the blockchain used to carry the SAFEMOON tokens. The heightened interest indicates a new growing sector on the Binance Smart Chain, turning it into the new launchpad for token sales.

SAFEMOON is a token with a supply of one quadrillion (one with twelve zeros), and aims to boost its price from a sub-penny position to as high as $0.01 in the future. This goal is supposed to follow the trajectory of Dogecoin (DOGE), which rose on a mix of memes and a strong community willing to hold onto the coin.

The utility of SAFEMOON is that it offers DeFi passive income, but without the high gas fees on Ethereum. Instead, the token uses the partially centralized Binance Smart Chain for faster, cheaper transactions. Its goal was to offer a democratic entry point into crypto with a very low initial price.

Like many new tokens, SAFEMOON went through a price rally, but in the past few days, its price sank by more than 60%.

The Safemoon project initially tried to increase safety by strongly incentivizing the holding of coins to accrue passive income. But selling still managed to drive the price down.

Safemoon is a token-based project based on the Binance Smart Chain network, and its value hinges on an automated liquidity protocol. As of April 2021, PancakeSwap is one of the DeFi venues that gives Safemoon most of its liquidity.

The key to SAFEMOON gains is that new owners are strongly incentivized not to sell. Holding onto the token accrues rewards, and is a mechanism to boost market prices.

Pancake Swap itself is one of the DeFi exchanges that is bringing significant liquidity to Binance Smart Chain, and competes with Ethereum-based DeFi.

The SAFEMOON project is thus part of the Binance exchange ecosystem, though only based on its decentralized trading mechanism. The token is available through Trust Wallet, but has not been listed on the centralized exchange.

The Safemoon landing page boasts of more than 1M token holders. The asset’s market cap, even after a correction, is about $2.8B. Still, SAFEMOON is far from being prominent on CoinMarketCap, where older coins are gaining more traction.

But the biggest problem for the community is the highly volatile price. Reports surfaced of inaccurate price displays, where the asset has vastly different valuations through Trust Wallet and other price display services such as CoinGecko.

Some of the owners have been unable to sell, while others fail to receive coins after a Pancake Swap trade.

For now, despite the hype, SAFEMOON remains risky and there are multiple skeptics noticing the project has promised too much. One of the red flags is that a single address holds more than 49% of the tokens.

While it is possible that these tokens will remain locked, there is also a possibility some of the holdings will be dumped on the market. A similar thing happened to SushiSwap, where the anonymous developer sold off his tokens and crashed the protocol.

There is a possibility that SAFEMOON survives longer even after the crash. But for now, the project is facing increased skepticism. The protocol’s CEO, John Karony, tried to calm down the community after the recent turbulence, but the opinions remained divided.

As of April 21, Karony also reported issues with Binance Smart Chain, without specifying the exact problem. SAFEMOON may be exposed to some forms of technical risk as well, with balances not appearing in the wallet.

For now, the route to acquiring SAFEMOON is to exchange Binance Coin (BNB) for Binance Smart Coin (BSC), then participate in the Pancake Swap liquidity pool. The only other route is to trade SAFEMOON on the Bitmart exchange. Currently, the Bitmart market price is reported to be about 100 times lower in comparison to the Pancake Swap pair, further raising red flags about the risk of losses from SAFEMOON.

The project’s team has pointed to the opportunity that one day, SAFEMOON will be traded on major exchanges, including the Kraken Exchange and Binance International. Until then, SAFEMOON will depend mostly on two DeFi pairs, which may cause significant price turbulence. Despite the social media hype and trends, SAFEMOON has not proven itself to be a safe asset.

Other Binance Smart Chain newly launched projects include Odin Protocol (ODIN), which will aim for token burns to improve value. BSC also carries a new series of meme tokens that repeat the DeFi model of Uniswap and remain extremely volatile.