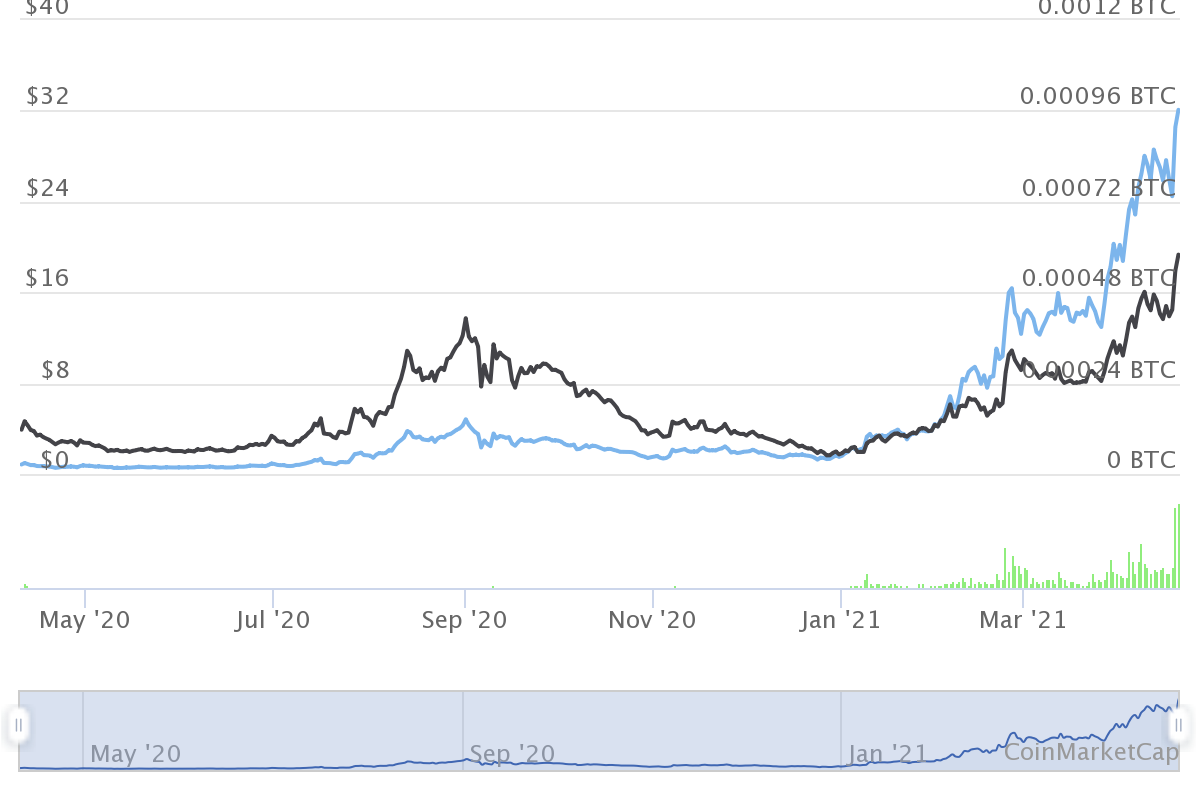 After the sharp correction during the weekend, most assets shed their latest gains and stagnated. But the Solana (SOL) project continues its expansion, pushed by unique market conditions. SOL traded above $29.60 on Tuesday, attempting to push above the $30 mark with a boost from bullish predictions.

SOL managed to reach new all-time highs while Bitcoin (BTC) was shaken down from its $55,000 tier and had to defend a lower support level.

The Solana project is yet another platform for tokenization and decentralized computing, which set out to compete with Ethereum (ETH). The SOL bull market started in January, after a long period of stagnated prices around $1.50. SOL is already among the top 20 of coins on CoinMarketCap, increasing its visibility and popularity.

The asset launched in May 2020, but its recent market boom is setting records both in dollar prices and against Bitcoin (BTC). SOL has grown by 10 times against BTC since the start of 2021. The performance of SOL follows the general trend of altcoins, which make up about half the market capitalization of all digital assets, or around $1 trillion.

Can Solana Compete with Ethereum?

The Solana platform is already operational for partners to build distributed gaming and decentralized finance apps. The project still does not line up with the largest platforms such as TRON, EOS, IOST, ONT, but has received attention for its attempts to host DeFi projects.

One of the bold moves of Solana was to provide a new setting for the Kin project, the crypto arm of the Kik chat app. Over the years, the KIN token had a rough time, as the US Securities and Exchange Commission set its eyes on the large token sale from 2017.

Finally, the Kin project settled with the SEC and is now pivoting into DeFi. The actual migration to Solana is still facing some glitches, as not all tokens are active on the new network. The Kin team still has a plan to migrate all KIN tokens to Solana, including the old ERC-20 tokens locked in Ethereum wallets.

The Kin project may give a boost to the Solana ecosystem, as it is one of the older and well-known crypto startups that managed to survive multiple crises.

SOL trades most actively on the Binance International exchange and on OKEx, absorbing the demand from Asian traders and other international communities. As with other altcoins, more than 50% of the volume comes from trading against the Tether (USDT) stablecoin.

Despite its growth, SOL remains a relative newcomer to the crypto space, and may be going through a price discovery period.

Platform coins also have a chance at commanding much higher prices, especially if locked for DeFi liquidity. The recent rise of NEO to three-digit prices reveals growing demand for platform coins that promise rapid development of side projects and draw in liquidity. The short-term predictions for SOL suggest the $50 price as the next target.

How to Use SOL

The SOL asset requires a different technology, thus requires users to adopt new types of wallets. Trust Wallet, the Binance recommended app, is one of the ways to host SOL tokens.

The Exodus wallet, with its built-in exchange, also hosts the SOL tokens conveniently. For more experienced users, the upcoming Phantom wallet may add SOL with extended DeFi and token-generation functionalities.

SOL adoption is still early, and for now the token is mostly used for speculative trading. As more DeFi projects come online, the blockchain may line up among the most influential platforms.

The Solana network relies on delegated proof-of-stake, with 748 active validators worldwide. Reportedly, the network can handle 50K transactions per second, ensuring future projects will not face the lags or high fees inherent to Ethereum.

SOL has continued on a parabolic trajectory for a few days now. But the market remains unpredictable, and altcoins are known for frequent corrections. For now, the SOL market manages to offset some of the losses on other pairs.

The most recent price rise for SOL happens on record trading volumes, above $1.2B per day. SOL has no historical precedent on keeping up these levels of trading activity, and may correct if traders move to another active pair.

SOL was among the few assets that survived the recent price drop. The other strongly performing asset was Dogecoin (DOGE), where traders bid to preserve the $0.40 price as a meme-level for the date of 4/20.