Decentralization is one of the mantras in the blockchain industry. Often, the argument goes something like:

Decentralization indeed has many advantages. In fact, this lesson will shed light on some of the crucial advantages later on. Nevertheless, many cryptocurrencies are not as decentralized as you imagine or would like them to be. Moreover, what does decentralization even mean?

That's why in this lesson you will learn:

You might at some point have called a company’s customer support, and they told you they cannot help you because their system is down. Even though each customer service rep has their own computer, this system is centralized. If a few crucial computers stop working, so does the entire system.

Political decentralization asks how many individuals or organizations ultimately control the computers that the system is made up of. Let's go back to the customer service example: if the company owns all computers that employees use, this is a politically centralized system because the company can take it back. determine the software etc. But if each employee works from their personal laptop, then the customer service department is politically decentralized.

Logical decentralization is a bit complicated. In simple English, it asks whether the interface and data structures of the system look like one whole object or a swarm of many small things.

Buterin proposes this as a heuristic: if you cut the system in half, including both providers and users, will both halves continue to fully operate as independent units?

Assessing how decentralized a cryptocurrency is

As a beginner, you take Bitcoin being decentralized at face value. Then when you read someone disputing that claim, you don't really know what to make of that. However, it is helpful to know how decentralized a coin is since that can indirectly impact a coin's long-term security and governance and, therefore, also its value.

The most tangible way of measuring a coin's degree of architectural decentralization is its hash rate.

Quick recap: Bitcoin and Ether are generated through mining, which requires computing hashes (cryptographic functions). The hash rate of a mining rig is the number of hashes that it can calculate per second. A coin's hash power is the sum of all hash rates.

The sheer amount of hash power is irrelevant since that only describes how much computational work is needed to mine a coin. Instead, we need to look at how distributed the miners are. If many different miners contribute to a coin's hash power, it is more decentralized. Say you had only one miner mining bitcoin, the situation would be the same as your employer owning all the company notebooks. If the miner stops mining bitcoin, no more transactions would be processed. Hence it is not decentralized.

This sounds good, but there's a catch. The crypto mining industry is not very decentralized. It is more similar to an oligopoly than to a decentralized, competitive market. For Bitcoin, four miners have more than half the hash power of the entire network. For Ethereum, it is actually only two miners. Unfortunately, the times when you could mine bitcoin with your computer and a graphics card are long gone. These days you need industrial scale equipment to mine bitcoin. That means it's profitable for big players to acquire more mining equipment and increase their hash rate.

However, the hash rate isn't the only determining factor. Another way of looking at architectural decentralization is to look at the geographical distribution of mining rigs. How decentralized is a blockchain if a majority of its miners are located in China, like is the case for Bitcoin?

The same goes for dependency on cloud services. If the majority of nodes are hosted by Amazon Web Services, this negatively impacts a coin's decentralization. You could also look at the reliance on a certain manufacturer of computing hardware. If, for some reason, this manufacturer stopped producing its hardware, this would influence the degree of decentralization. Even a decentralized blockchain depends on the centralization of the infrastructure it interacts with at these junctures.

Vitalik Buterin states that blockchains are politically decentralized. At first glance, this is indeed true since many different individuals usually control the computers a blockchain is made up of. But we need to look at this in a more nuanced way.

Firstly, it depends on the blockchain's consensus mechanism. In proof-of-work blockchains, miners decide if they are going to add or reject a block to the blockchain. However, we noted that mining is past the "do it from your laptop" stage and requires industrial equipment. So to meaningfully participate and have a say in the process, you need to invest a significant amount of money. Is this still really decentralization, and does it sound so different from regular politics?

Proof-of-stake blockchains are governed by all coin holders. In theory, this eliminates the tendency of consensus power to cluster in the hands of a few because you don't need to buy specialized, expensive hardware. Also, token holders have an interest in the system working, so the value of their tokens goes up. This means their incentives align with the long-term interest of the system. Moreover, finding social consensus should be more efficient since, in theory, everyone's interested in the same thing. In turn, the system will innovate more quickly.

However, proof-of-stake isn't flawless either. Token holders might be incentivized to make decisions in the system's best long-term interest, but they may not have the expertise to do so. Again, is this so different from regular politics? You know what's best for you, but you don't know how to get there and end up making the wrong decisions that hurt you.

Moreover, and this has been a major counter-argument of PoW proponents, once a party has accumulated more than 50% of coins in a PoS system, there is no legal way of stripping him of the coins. Depending on the coin's design, this might be a long and expensive, but certainly possible, undertaking. Essentially, the blockchain's governance would then be in the hands of this one party.

Another factor to consider is that in PoS system too, there is an upfront cost to meaningful participation. Ethereum 2.0 would require 32 ETH to participate in confirming transactions. At the time of writing, this amounts to about $64,000, so it's definitely not cheap. Coins might also be geographically, or otherwise, clustered. If most of the nodes in a PoS system are in Silicon Valley, the situation isn't too dissimilar from miners all being in one country where electricity is cheap.

Lastly, you have political influence that's not reflected in token holdings. Someone like Vitalik Buterin has an outsized influence on Ethereum that goes far beyond his actual share in the project. The same goes for Elon Musk on Dogecoin, which is amazing since his possible token holdings are not even publicly known.

In PoW systems, the equivalent problem would be different incentives of miners and developers. The former want to increase transaction fees to increase their payoff. The latter have an incentive to strive for the opposite to improve the system.

Is it possible to halve providers and users in a blockchain and still have a functioning system?

The answer is not so clear. You think of a blockchain as one computer with one continuous long chain. Unlike torrents, which are dispersed, you cannot just halve that. But we saw no one centralized infrastructure is required, and the rules are not controlled by a single person. Essentially, a blockchain is a swarm of mosquitoes that looks like a rock. 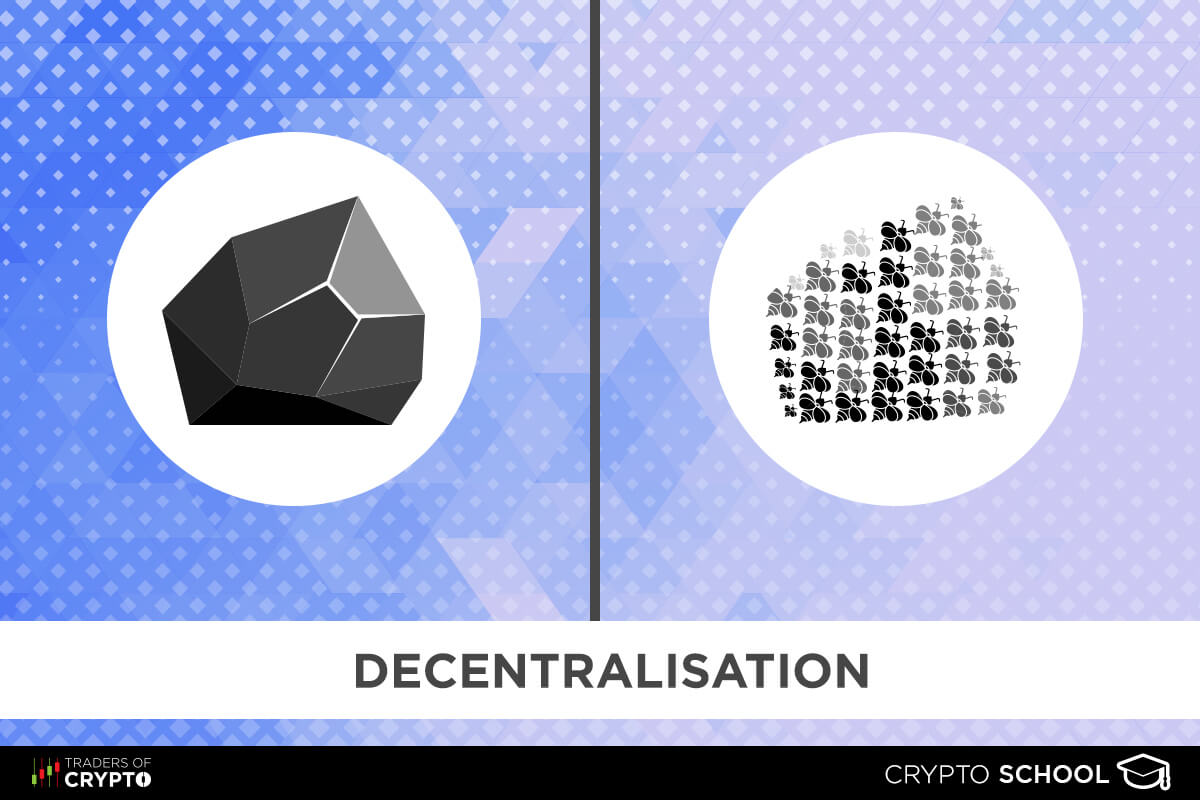 The benefits of decentralization

Why do we even need decentralization? It seemed like we were getting on pretty well with the centralized systems we already have. However, there are a couple of important benefits to decentralization.

They have a higher fault tolerance

They are more resistant to attacks

It is more expensive to attack and destroy a decentralized system because it doesn't have one weak spot that you can attack at a cost lower than the entire system. If a hacker wants to attack a company's infrastructure, he will likely look for its servers, especially if they are all in one location. Taking out the servers costs much less than the entire company is worth. The same holds true for influencing humans. Ten people are harder to bribe than one. For blockchains, this implies being geographically and architecturally as decentralized as possible.

It is harder for rogue players to collude

In centralized systems, it is easier for one side to collude to screw over the other. Countless government and corporate corruption scandals are a testimony to the power of collusion of one well-informed and well-coordinated side against the other.

In decentralized systems, this is more difficult, in theory. However, it's questionable how true that is for blockchains if a majority of a blockchain's hash rate is controlled by a handful of individuals. The problem is that you want just enough collusion for the system to keep running smoothly. But you also want to keep out the bad kind where one side conspires against the other to push its own initiative.

Luckily, in blockchains, there is some natural discoordination built in. For Bitcoin, miners often speak Chinese but developers English. Communities are generally dispersed, which is beneficial since cryptocurrencies stand and fall with the power of their communities.

Decentralization is a controversial topic in the blockchain ecospace. Depending on how you read the data, you can make a case for almost any cryptocurrency to be highly centralized or decentralized. At the end of the day, it’s important to remember that decentralization should have a function and not just exist for its own sake. 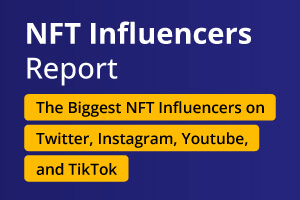