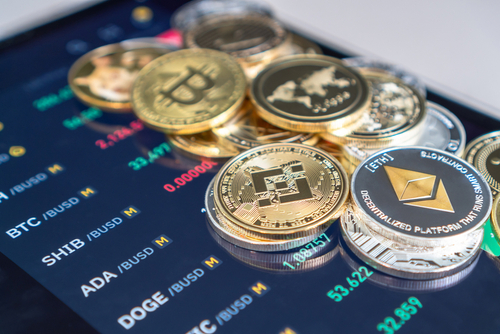 The cryptocurrency market has indeed parted into two. Basing it off on the recent price action, the buyers have been putting focus only on Bitcoin and ignoring the altcoins.

After a significant push by the buyers in most coins, most altcoins have failed to hold on to the gains. But Bitcoin, on the other hand, has been moving in the opposite direction as the bulls do not seem to give up just yet.

The global crypto market cap has been sustaining well above the $2 trillion mark ever since the markets took a turn to the upside. And a majority of the share comes from BTC’s recent north push.

As the Bitcoin price touched the $55,000 level, the market cap of the cryptocurrency has reclaimed its trillion-dollar mark. Not only has the Bitcoin market has made a significant move to the upside, but it has also managed to break through a major supply level as well.

Altcoins, on the contrary, are pretty much trading at the same levels after attempting to breach through its resistance zones twice. However, it does not put them in a bad light per se because the buyers have managed to keep up with their support levels despite dipping below them.

Furthermore, the fundamentals and technological updates do not seem to stop the altcoin market. With the competition getting tighter, many altcoin projects are stepping up their business by bringing new developments to their existing systems.

LUNA Pumps as its Native Savings Protocol touches $5B in TVL

Terra’s proprietary savings system, Anchor, which offers a high return on stablecoins, has hit a new goal, with a total value locked (TVL) of $5 billion. The protocols, Mirror and Anchor, produce the majority of Terra project’s on-chain demand. Mirror provides the service of synthetic asset trading, and Anchor, on the other hand, allows for high-return deposits, with TerraUSD (UST) paying a 20 percent APY.

UST is closely related to the native token of Terra, LUNA. UST is a stablecoin that uses LUNA to keep its value identical to that of the US dollar. With a market worth of two billion dollars, it is presently the fifth-largest stablecoin.

It is a known fact that Terra’s LUNA crypto has been one of the best performing altcoins ever since the markets reversed in May this year. And surprisingly, the uptrend is still in play.

The market did slow down after reaching the $30 level, but the retracements were shallow and lacked momentum. As a result, the market ended up in favor of the buyers after they took support at $26.37.

The long-awaited Columbus-5 upgrade, which includes the Inter-Blockchain Communication protocol, is expected to provide Terra access to plenty of Dapps in the Cosmos ecosystem.  Data may now be exchanged between Terra and other Cosmos-integrated blockchains, projecting an increase in demand for Terra’s LUNA and UST, and eventually its price as well.

“Columbus-5 is now officially live as the new Terra mainnet! Welcome to the future of Terra https://t.co/EFnQnFr2lB” — Terra (UST) Powered by LUNA (@terra_money)

In recent years, the blockchain gaming and NFTs industries have attracted a lot of attention in the crypto world. EnjinStarter and Enjin, two major players in the NFT market, have also formed a strategic collaboration to expand their space wider.

EnjinStarter, Enjin ecosystem’s launchpad, is well recognized for its backing of the blockchain gaming industry. The collaboration will aid the Enjin ecosystem’s development and expansion. As a result, developers will have quick and easy access to Enjin’s patented NFT technology as well.

EnjinStarter has received a pilot investment from Enjin in addition to the collaboration – implying that both systems will work together to promote the Enjin ecosystem’s growth and acceptance.

On a technical note, Enjin looks similar to other altcoins. The ENJ crypto is reversing from its downtrend. Of course, the uptrend is not evident as of yet, but it is certain that the buyers have stepped up.

After setting a recent high at $2.2, the ENJ market took a turn following the rest, bringing its price down to as low as $1.2. Before the buyers made their move last week, the trend seemed bearish as the prices made lower lows and lower highs.

But as the resistance at $1.47 failed to hold, the buyers took the game thereafter and officially broke through it to convert the level to support.

Currently, the bulls are finding their next hurdle at $1.8, which is certain to break in the upcoming trading sessions.

Now you can get your other favorite cryptos from our list of popular and reliable cryptocurrency exchanges.