BTC Remains Bearish on the Short-Term 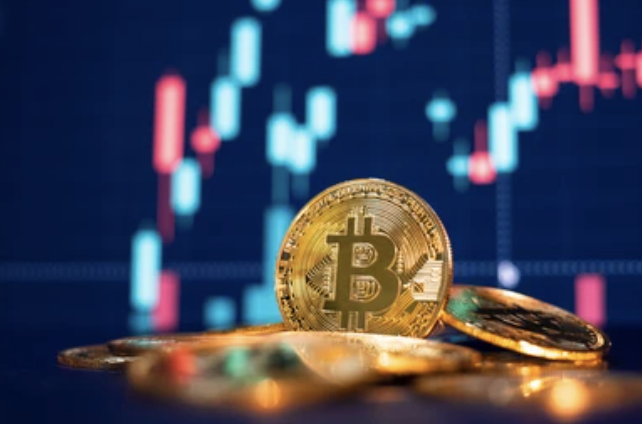 The cryptocurrency market is showing its colors of volatility as the bulls and bears are fighting their levels. The current trend, without a doubt, belongs to the sellers, but the prices unable to make evident lower low sequences give hints of the big buyers existing in the market.

The world’s largest cryptocurrency – Bitcoin, which was being overlooked by investors due to the better performances and returns in altcoin, is eventually reclaiming its valuable spot.

The perspective towards Bitcoin cryptocurrency is gradually changing. Initially, crypto was considered as a marketplace to achieve better gains than the traditional markets. But with the growth of altcoins and their prospects, the money is being flowed into alt projects during the risk-on mode. As a result, Bitcoin is ultimately turning into a real store of value as people are seen to move their assets to BTC during the risk-off mode.

Consequently, Bitcoin usually observes impressive recovery during market downturns. In the current crypto market phase, too, BTC coin has the upper hand in buying momentum relative to others.

The recent news events had brought a dip in the markets yet again. Bitcoin, which had powerfully recovered up to $45,000, got rejected by the sellers due to China’s crypto ban news. However, the prices reversed back up aggressively, bringing it to $44,000.

As everyone expected this to be the onset of the buyer’s game, the price action panned out differently. The prices took resistance at the same $44,000 level, which brought the market down to the $41,000 support level. Of course, a three thousand drop is no biggie in the Bitcoin market, but the fact that the buyers failing to breach the resistance level was a reason for concern.

Currently, as of writing, the BTC market is trading at around $42,000 after instantly bouncing off the support level.

The September month has been bearish for BTC, as per the charts. But in terms of Bitcoin adoption, the numbers have seen a substantial rise. Especially with respect to the active BTC addresses holding over 1 BTC, the stats have spiked north.

According to the data from Glassnode, a crypto analytics platform, the total BTC addresses whose holding is above 1 BTC has hit a four-month high this month. Precisely speaking, the analytical platform indicated that over 811,000 BTC addresses had a balance greater than 1 Bitcoin. It also highlighted that majority of the addresses are coming from 2018.

The last few weeks in the BTC market have been bizarre. Although there was an impressive rise in the accumulation of BTC this month, the BTC Median Transaction Volume took a drop hitting the nine-month low. Additionally, the supply coming from short-term BTC investors dropped sharply. The dip in supply was observed on some major cryptocurrency exchanges as well.

Ever since the price set a high at $52,000, no buyer has been able to step up and maintain grounds in the market. A drop was indeed expected as the momentum of the buyers on the way up, as the prices were reaching potential resistance levels, was slowing down quite significantly. For instance, it took over a month for the bulls to reach the $52,000 mark from $44,000. But the bears took it down within a couple of days – clearly indicating some selling pressure building up.

The major support at $42,500 did hold initially as the buyers stepped in strong. But the price got rejected much below the high, leaving the first lower high in the market. And as a consequence of the sellers picking up momentum, the market dipped, again very strongly.

The new lower low was set at $40,000. The buyers did kick in powerfully, who attempted to breach above the Support/Resistance level. But the sellers used it as the new resistance to drop the prices. However, this time there was no lower. The $40,000 support held strongly, with a wick on the bottom of the candlesticks. As a result, the prices went into consolidation. 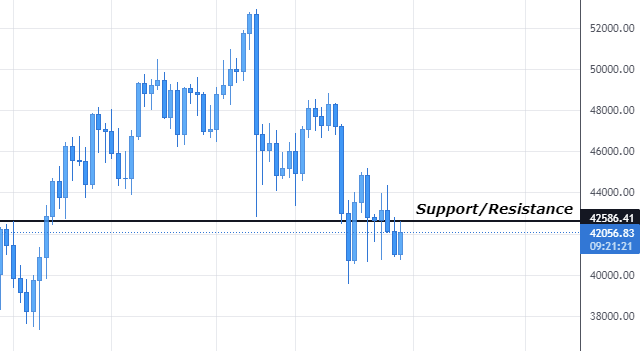 Of course, the sellers are holding grounds in the current market scenario, but the attempts from the buyers cannot be taken for granted. Despite the strong selling pressure of the bears, the long-term buyers have kept their demand levels firm. The entire level, around $40,000, is a strong demand zone. And the buyers showing their presence every step of the way proves the existence of the big accumulators.

That being said, it is hard to assure that the prices have bottomed out at this support level because sellers are not willing to give up just yet. Hence, it would be logical for the prices to drop below the $40,000 zone before the buyers prepare to go long and potentially make new higher highs.

Now you can get Bitcoin and most of your other favorite cryptos from our list of popular and reliable cryptocurrency exchanges.