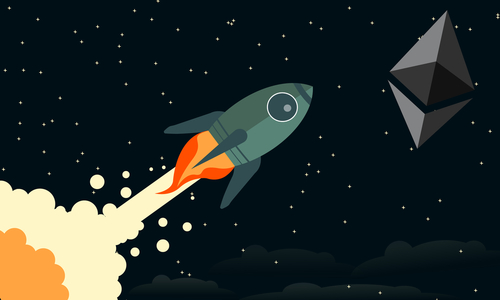 Ethereum’s native token Ether (ETH) broke its previous ATH and the most significant psychological resistance level $3000 mark. During the early hours of Monday (UTC), the price of ETH broke this most anticipated level on many significant crypto exchanges such as Binance, BitMEX, OKEx and more. The price of Ethereum has grown by over 360% since the beginning of this year.

The recent price surge has helped Ethereum enter the $300 billion club, only the second crypto to do so after Bitcoin (BTC). At the time of writing, the price of one Ether was hovering around $3200 with a total market capitalisation of ~$360 billion. This has helped Ethereum to gain 16% dominance in the Crypto industry.

What’s more surprising is that a digital currency launched just six years ago is now more valuable than the Bank of America. On the other hand, Bitcoin has surpassed the market cap of Tesla and Facebook to become the six most valuable asset in the world.

What Caused This Surge in Ethereum?

Experts say that there are numerous reasons for this price surge in Ethereum, and many still believe that this crypto is still undervalued. One of the primary reasons for this could be a sudden surge in transactional activity on the ERC20 network and the Ethereum blockchain. Retail traders have started to show some keen interest in the space of Decentralised Finance. That can be seen in the astronomical rise in the TVL (Total Value Locked) figures crossing 100 billion dollars.

The rise of institutional adoption of cryptos has also contributed to this surge, with tens of centralised financial entities looking to enter the crypto space. Recently, the European Bank has announced its plan of issuing a 2-year digital bond worth over $100 million in partnership with other major banks, including Goldman Sachs.

Will The Price Continue To Surge?

One of the most controversial developments to the Ethereum blockchain has already been scheduled for July 2021. This alteration is called the EIP (Ethereum Improvement Proposal) 1559, and it will go live with the hard fork. Most of the Ethereum miners are against this decision as it will directly impact their reward structure.

Typically, users of Ethereum pays a gas fee to the miners so that the transaction gets included in the block. With this EIP 1559 upgrade, the gas fee gets directly delivered to the network, and only a fractional amount will be tipped to the miners. This upgrade will eventually solve the most important problem of using the Ethereum network: the excessive gas fee.

Also, with this, the reward system is changed, and miners get comparatively lower amounts of ETH. As a basic rule of economics, this will decrease the selling pressure on Ethereum as a whole. The complete launch of ETH 2.0 to a POS consensus algorithm is one of the most anticipated events for the investors.

As you can see in the price chart below, Ethereum (ETH/USDT) crypto pair has grown by over 44.2% since the past nine days. Crypto experts state this run is so remarkable that it could be some of the first signs of ETH showing the possibility of taking over or directly competing with the godfather, BTC.

The ETH/USDT pair can be seen with a series of bullish candles closing one above the other on the daily timeframe. The price took support from its weekly support area at $2,147 to make it brand new all-time high value and break the $3000 mark. The next possible resistance for this pair could be at $3,433 and the round-number resistance at $3,600. There’s no sign of sellers in the market at this point, but the price could take support from the daily support area at $2,465 before shooting up to the north in case of any adverse selling pressure. We can also confirm the bullishness on this pair by looking at the 10-period moving average. It is way below the price action, indicating a clear buy market.

On the 4-hour time frame, a clear uptrend can be seen on the ETH/USDT crypto pair. By analysing the trend drawn on the above chart, the price could shortly reach the upcoming resistance levels at $3,433 or $3,600. The support levels on this time frame are at $2,933, $2,465 and $2,147. There are hardly any chances of ETH reaching the last two support levels in the near time, so it is ideal to keep an eye on the $2,933 mark if you are an intraday trader.

We should always note that Ethereum is not just crypto but an entire ecosystem that is already revolutionising the crypto space. So we still consider that ETH is undervalued based on its future potential. Cheers!