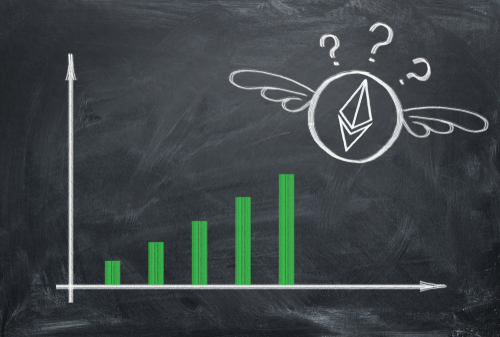 Of late, there has been a shift in the buying trends in the cryptocurrency market. It looks like the market is taking turns with respect to them making higher highs. Going by the recent trend, the bulls have taken charge with Ethereum after setting an ATH in Bitcoin.

Although the bulls showed their presence in the Bitcoin market quite strongly, the market took a pause after heading a couple of percents higher than the previous ATH. At the same time, when Bitcoin was consolidating, the Ethereum crypto was inching to its ATH, which even managed to break through without any hurdles.

Seven Days Passed and Ethereum Continues as A Deflationary Asset

After completing the first seven days of deflationary circulation, Ethereum is making great progress toward becoming totally deflationary. Although it may not be a continuing pattern, it does provide a little look into the network’s future plans.

The deflationary in the supply signifies that more Ethereum has been annihilated in the time span than has been produced through mining.

The London hard fork created the groundwork for deflation by introducing a burning algorithm. Nearly $3b worth of ETH crypto has been destroyed since its introduction, and roughly 15,000 ETH is being burned every day, which is worth roughly $60 million as of the current market price.

When Ethereum 2.0 is released, it will bring more than simply deflationary pressure with it. According to the analytics firm Ultrasound, when the shift is complete, Ethereum’s supply may be lowered by 2% every year.

Ethereum 2.0 will also see a move from Proof-of-Work (PoW) to Proof-of-Stake(PoS), which will drastically cut the network’s energy usage. As part of the plethora of features arriving at the network, it is commonly predicted that gas prices will be greatly lowered.

As a result, Ethereum’s stellar performance from October continues. Currently, the second-largest cryptocurrency has a market capitalization of $533 billion, with a daily transaction volume of $17.3 billion.

Gas costs might possibly be a factor in the recent upward trajectory. Gas prices have risen dramatically in recent weeks, with average transaction costs on the network above $60.

The NFT Market on the Rise Helps ETH Demand to Stay

Many cryptocurrency enthusiasts may be perplexed as to why Ethereum is gaining traction when Bitcoin and other altcoins are gaining immense traction. However, since it is the crypto asset that delivers value to NFTs, ETH has far more worth than is commonly assumed.

Even though it has been a digital auction system since 2017, the NFT market has gained traction from 2021. Ethereum crypto has been the vehicle that has allowed these virtual parts to be created, and as the NFT wave develops, so will crypto acceptance.

Furthermore, Ether will also contribute its technology to the metaverse that Facebook, as a technological business, plans to launch in the coming months. ETH crypto will certainly have a few fantastic days in which its value rises owing to the adoption of various services.

Active ETH Addresses Surges by 45% in One Month

According to data published by prominent on-chain analytics firm Santiment, the number of registered Ethereum addresses has increased by 45 percent in the last month. According to the company’s analytics staff, this indicates an increase in the coin’s value.

On November 3, 2021, the Ethereum hashrate achieved a lifetime high of 812,768 GH/s, as reported by U.Today. Despite the fact that ETH fees are now being burnt, miners remain drawn to the Ethereum network because they may be “tipped” by network users who still want their transactions validated faster, a process similar to that used by Bitcoin users.

After Bitcoin made it is brand new ATH, Ethereum followed in the same footsteps. After quite some struggle on the way up last month, the buyers finally managed to reach and even surpass their previously set highs.

Talking about the price of ETH token, the ATH stands at $4335. The bulls, after bottoming out at $1750, prices have been in the territory of the buyers. Although it did face quite a few hurdles on the way up, the buyers accumulated it in the form of a discount.

The uptrend in ETH is in play with the market making higher high and higher low sequences. That said, if the momentum is taken into consideration, the buyers are certainly out steam on the second push north. However, with the distance covered being as much as the previous push, it does put a higher bias on the bullish side.

Currently, the ETH crypto trades $4467, a few percent higher than its previous ATH. Given the altcoin season getting into action, ETH is indeed still at a discount.

Now you can get Ethereum crypto and most of your other favorite cryptos from our list of popular and reliable cryptocurrency exchanges.