Credit card transaction fees are convoluted because they involve so many parties. Every transaction involves:

Say you want to buy a $100 shirt in a store. When you pay by card, the issuing bank (your bank) charges the receiving bank (the merchant's bank) the interchange rate. The interchange rate is set by the credit card network and is kind of a "cost of doing business with cards." It's a buffer against the credit risk of borrowing customers. For example, a customer buys something on credit and later defaults on that falls back on the credit card network, which hands it over to the bank. To protect themselves against that case, financial institutions have introduced fees.

For brevity purposes, we'll leave out the exact mechanism of how the interchange rate works. When shopping online, there's also a payment processor such as Stripe or PayPal involved. This middle man adds yet another markup. In total, 1.5-3.5% of every card transaction goes to banks, credit card companies, and payment processors. With that in mind, it's easy to see why many people see cryptocurrencies as a superior alternative.

How transaction fees for blockchains work

Even though there is no middle man, blockchains do have transaction fees as well.

Each Bitcoin transaction is added to a memory pool (or mempool) that miners choose transactions from. Naturally, miners pick the most lucrative ones, i.e., the transactions with the biggest fees, first. Since a Bitcoin block is only one megabyte, it can fit only a limited amount of transactions. That is why you have to wait longer if you chose a low transaction fee.

Each transaction on Ethereum, whether it's sending money between wallets or executing a line of code, carries a cost. This cost is called gas. Gas is calculated in Gwei, which is a denomination of Ether (like cents and dollars). To make your car (your transaction) run, you fill it up with gas (in Gwei). But you can also make your transaction run a bit faster by paying a bit more because, like with Bitcoin, Ethereum miners have an incentive to validate the transactions with the highest costs first. Therefore, the gas price is the actual transaction cost plus the incentive paid to miners.

Ethereum blocks also have a gas limit. Let's assume many people want to use the network, so they decide to pay a little higher incentive to miners to get their transactions validated. As a result, blocks hit their gas limit more quickly, and fewer transactions get validated. The network clogs up, resulting in a rise in gas prices. The Ethereum network becomes a victim of its own success.

Ethereum plans to deal with that challenge by changing its validation mechanism. In the future, blocks will not be mined anymore but confirmed by a mechanism called proof-of-stake. Miners will become validators, and less work will be required on their part. That should lead to transaction fees coming down and Ethereum becoming more usable on a big scale.

Not all blockchains mine new coins. Many other blockchains use the proof-of-stake mechanism Ethereum plans to install since it requires less computational work, thus leading to lower fees.

Below, you find a comparison of transaction fees across different blockchains. 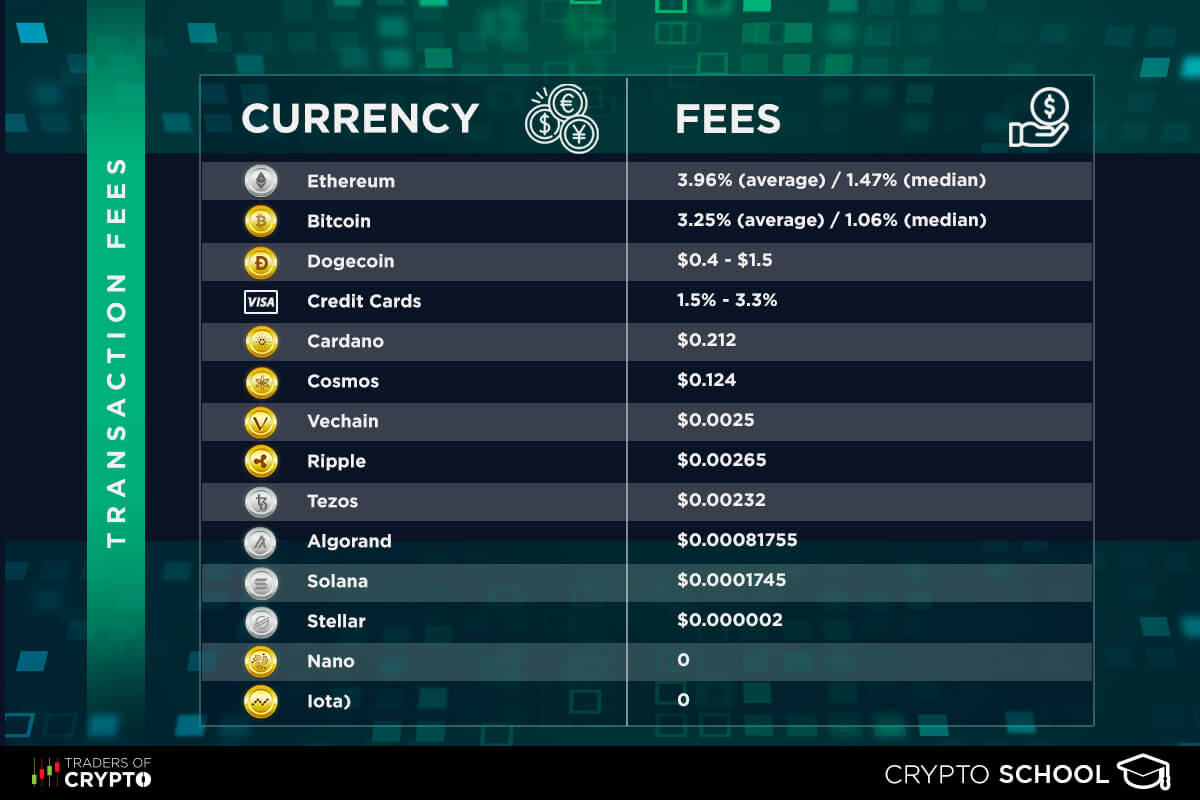 The numbers for Bitcoin, Ethereum, and Dogecoin are based on data from cryptofees.net. Evidently, the most popular cryptocurrencies are far from being the most cost-efficient, quite the opposite. They are as costly as credit cards and might even be worse at busy times. Considering the much slower processing time of blockchains like Bitcoin and Ethereum than credit cards and other blockchains, one cannot help but ask why some blockchains have lower transaction fees and why are the most expensive ones the most popular?

Answering the latter question is straightforward: Bitcoin and Ethereum were the first popular blockchains and have to this day a massive trust advantage over other blockchains.

These blockchains were not built with mass adoption in mind but rather for "idealistic purposes." This first-mover advantage led to community growth that no other blockchain project was able to outperform so far. Despite high transaction fees, users will stick with Bitcoin and Ethereum because they are tried and tested networks instead of switching to newer and possibly more efficient solutions.

Transaction fees also depend on a blockchain's architecture and use case. Proof-of-work blockchains like Bitcoin and Ethereum maximize security but do that at the expense of having high transaction speed. Because of their architectural focus on security, both have high transaction costs. Blockchains that followed these two were built specifically as payment solutions (Ripple, Stellar, Nano) or as solutions for the Internet of Things (IOTA).

You might wonder how lower transaction costs result in less security. If a blockchain has no transaction costs, such as Nano, it becomes liable to Sybil attacks. These are spam attacks on the network, where the attacker creates a lot of false identities and overloads the network with transactions. This has happened to cryptocurrencies like Nano and is why almost all networks choose to impose economic costs as barriers of entry, such as staking or mining coins in order to secure the network.

However, as you will see, blockchains can also be used beyond peer-to-peer payments or creating decentralized apps. Then, transaction fees do become a problem.

IOTA is a project that has no transaction fees but whose use case isn't the peer-to-peer transfer of money. Instead, it was built for the Internet of Things.

The Internet of Things is a network of physical objects that exchange data with one another and "communicate" in that fashion. Easily understandable examples are smart homes or self-driving cars. Unsurprisingly, the Internet of Things creates an enormous amount of data, which is constantly being exchanged between devices. That begs the question of whether you should pay for this data transfer, and if so, who should do it. Blockchain technology is an obvious solution as a payment platform because they exhibit the necessary attributes:

From a security perspective, there needs to be a mechanism to prevent spam attacks on the system. Transaction fees could be such a mechanism; however, it is questionable if that would be the most sensible solution from an economic standpoint. For instance, take the charging of an electric car. A Tesla Model 3 takes 7.5h to charge. Assuming a rate of one transaction per second at $0.0001 fee (transaction cost on the Solana blockchain), you get:

Keep in mind this is only the cost for transmitting the data, not the actual electricity cost! With the Internet of Things, massive amounts of data might render even micropayments unsustainable.

Transaction fees are more than just a nuisance that makes sending money from point A to point B more costly. Although blockchains offer an improvement over existing solutions thanks to their architecture, they will likely need to evolve to be applicable beyond mere payment solutions. Considering the amount of data humans will produce in the future, even the minuscule fees of some modern blockchains may not be good enough.