Which are the most profitable cryptocurrencies to mine?

Cryptocurrency mining has exploded in popularity thanks to the decentralised nature of crypto, as anyone with the right equipment can set up their own mining rig to earn a tidy profit. Even in the face of huge price fluctuations miners contribute to the network by processing transactions and securing the blockchain to earn cash by minting new coins.

But which are the most profitable coins to mine? We’ve delved into the data to find out how much profit you could make by setting up your very own mining rig and which currencies miners are losing the most on.

The most profitable cryptocurrencies 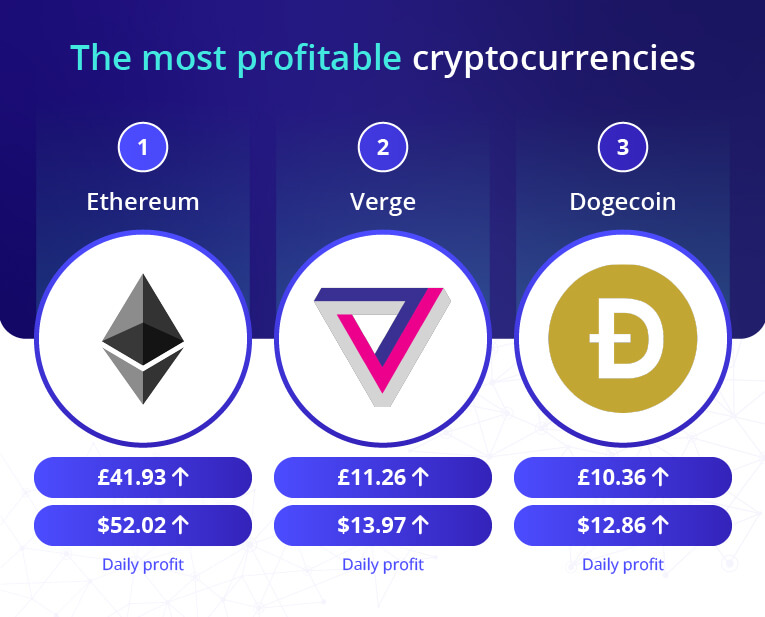 Second, only to Bitcoin in terms of market capitalisation, Ether is the native token on the Ethereum blockchain making it one of the most valuable cryptocurrencies. Mining this coin will net an estimated £41.93 ($52.02) daily. However, Ethereum will soon shift to a proof-of-stake protocol making mining obsolete.

Originally named DogeCoinDark, this open-source cryptocurrency is designed to protect the anonymity of its users by obscuring their IP addresses and geolocations. Mining Verge will net an estimated £11.26 ($13.97) a day, taking it to second place.

This cryptocurrency is considered the first meme coin and was created to poke fun at the wild speculation in cryptocurrencies. Despite this many people consider it a legitimate investment and it currently has a market cap of £9.524 Billion ($11.9 Billion). Miners looking to turn a profit with Dogecoin can expect estimated daily returns of £10.36 ($12.86) 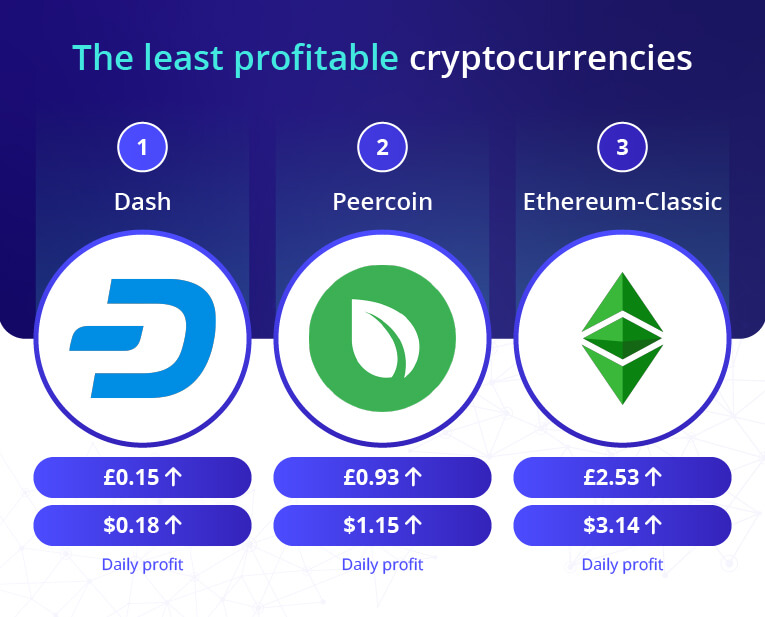 Dash is the cryptocurrency generating the smallest profit, netting miners just £0.15 ($0.18) a day. This altcoin aims to become a medium for everyday transactions and is already being used in countries facing economic crises which have made their native currencies worthless. Dashcoin is also in the top 100 most valuable cryptocurrencies, with a market cap of £505 million ($634.5 million).

This altcoin was the first to combine proof-of-work and proof-of-stake algorithms in response to the high energy consumption of previous cryptocurrencies. Peercoin’s network also has built-in inflation which acts as an economic incentive for miners.

Formed after Ethereum’s DAO was hacked, Ethereum-Classic serves to preserve the original Ethereum code, meaning it cannot be updated, unlike Ethereum. The altcoin has the same functions as Ethereum and is used to support smart contracts.

The cryptocurrencies losing miners the most money 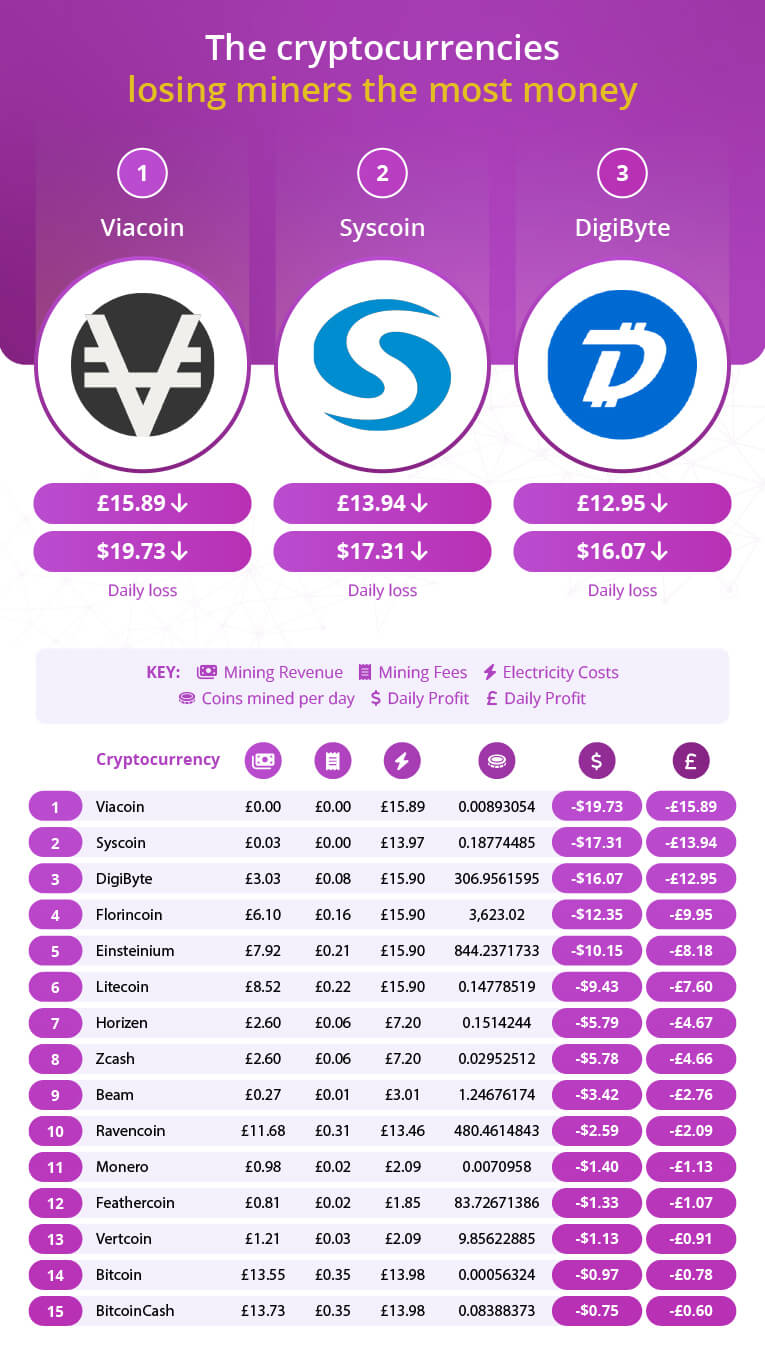 The cryptocurrency losing miners the most cash is Viacoin. A key feature of this altcoin is its transaction speed, processing transactions in just 24 seconds. Miners looking for quick returns will be sorely disappointed with Viacoin as mining rewards are only distributed every 6 months.

This altcoin is merge-mined with Bitcoin, so miners can mine both currencies at the same time, making its blockchain more secure. The currency is the native token of the Blockmarket, a decentralised global commerce platform.

DigitByte is the coin losing miners the most money, with miners losing an estimated £12.95 ($16.07) daily because of the energy needed to mine this cryptocurrency. One of the more obscure and low-value cryptocurrencies, Digibyte is based on the Bitcoin blockchain but has faster processing times and multiple mining processes, making the blockchain more secure. 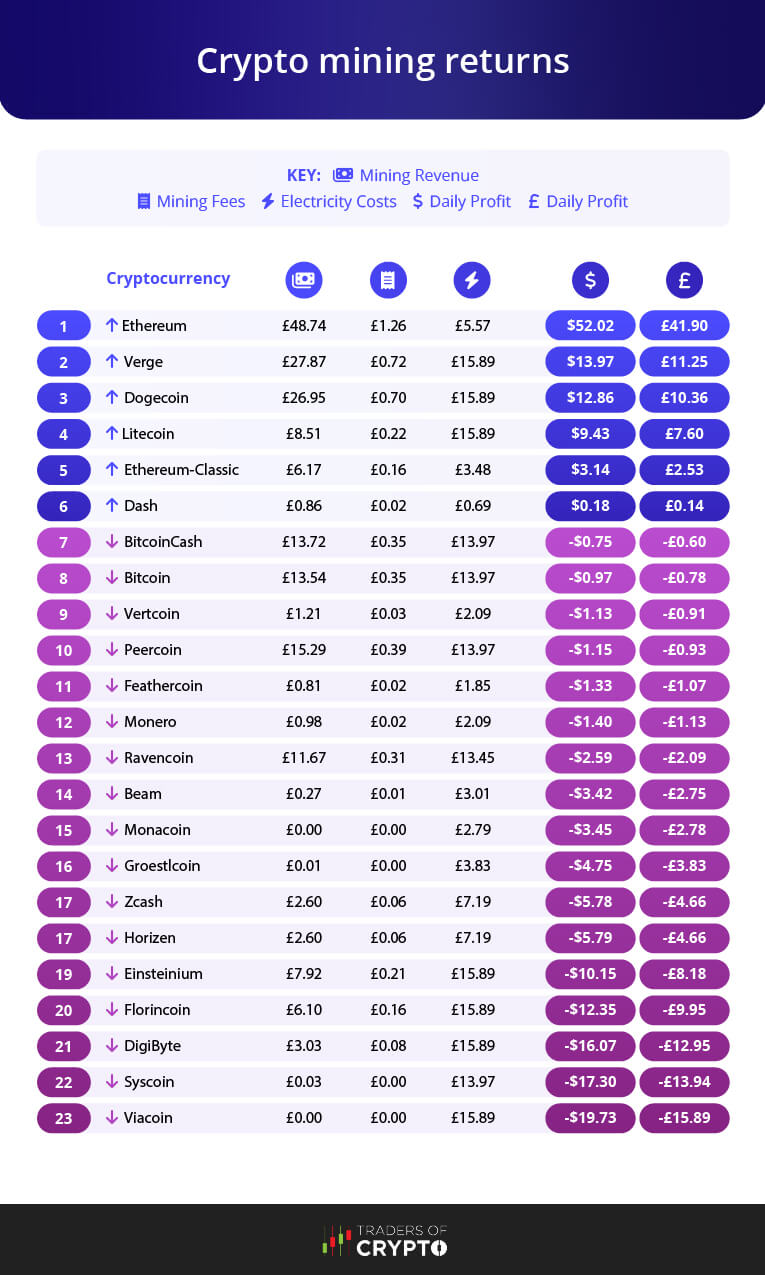 Beginning with a list of proof-of-work cryptocurrencies, we calculated the profit for each cryptocurrency using the highest specification mining rig according to coinwarz.

For the calculator, the average price per KiloWatt hour was taken from the Department for Business, Energy & Industrial Strategy’s 2021 report on Average annual domestic electricity bills by home and non-home supplier.

Pool fees for the calculator were calculated by taking an average of all the listed pools from Bitcoin Wiki.