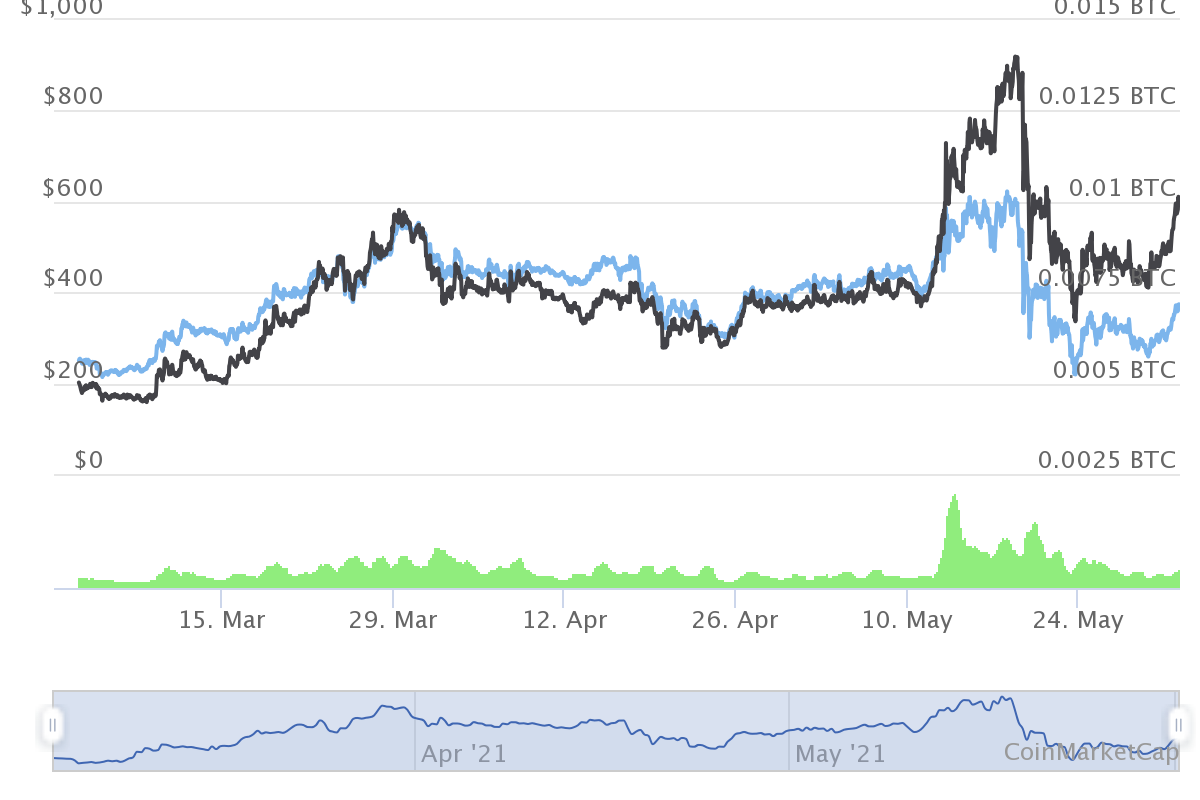 Kusama (KSM) is having a faster recovery compared to other digital assets. After Bitcoin (BTC) rejected levels above $37,000, KSM was among the few altcoins that grew by more than 23% overnight.

KSM is a complementary asset to the Polkadot (DOT) token, created with the aim of expanding and scaling the decentralized finance ecosystem. The news of the upcoming parachains are sparking more interest in the asset, with expectations the continuing demand will raise prices.

KSM recoveded to $375.22, still far from its recent highs above $600. The asset is still above 0.01 BTC, and trading volumes are yet to pick up again. But KSM is also having a revival on social media, on expectations of so called auctions starting soon.

What are Kusama Auctions

The Kusama network is an attempt to scale the Ethereum main chain. This will be done through a technology known as parachains, a solution that can connect multiple blockchains and perform distributed computation without high transaction fees.

Kusama and Polkadot are thus related platforms where teams can go on to build additional networks, with complete tokenization models and their specific economic rules. But unlike previous main chains, where token creation is free, the creation of a parachain will require a stake of KSM or DOT tokens. Kusama will initially work as a testnet for Polkadot, running riskier and untested functions and smart contracts.

Auctions are a future stage for both projects, where teams will compete in an open-end auction to buy a slot and the right to build a sidechain that will work for a certain time period. Instead of creating gas fee constraints to network use, Kusama frontloads the right to participate through auctions.

The exact date of the auctions is unknown, but it may arrive in the near future. The OKEx exchange already hosts a list of upcoming auctions for Kusama as well as similar projects.

What are Crowd Loan Auctions

The initial idea was for teams to bid for slots on the Kusama network. But at this point, it is unknown how much KSM or DOT tokens would be needed to complete the auction.

For that reason, some projects will use crowdsourcing to fund their parachain purchase. One of the first projects is Kakura (KAR), which is already opening a crowdfunding registration.

Kakura Network has made a call to KSM holders to lock in their coins for a predetermined period (6, 12 or even 24 months). The staked tokens will be returned after the lockup period, with additional passive returns in KAR tokens.

The auctions are somewhat similar to an ICO, though the buyers will also receive their principal in the future. For the price of KSM and DOT, the auctions will be a bullish event, which will diminish the circulating supply of those assets.

Users also receive a warning to do their due diligence before crowdfunding loans. The model may be repeated by dishonest projects. The only failsafe is the fact that the locked KSM will be returned automatically once the staking period ends.

What is the KSM Trading Profile

Despite the drive to turn KSM into a token for passive income, the asset is also actively traded throughout both centralized and decentralized exchanges. KSM/USDT is the most active Binance trading pair.

The asset is also available for EU-based traders on the Kraken exchange, in the KSM/USD pairing. But the smaller markets also see greater volatility and slippage.

More than 75% of all KSM trades depend on USDT pairings, making the asset decouple from BTC. But despite the trading hype, KSM remains a newcomer to crypto assets. Its value hinges on the growth of parachains and the success of projects to build appealing tokenomics models.

KSM is still not linked to the Uniswap network, and the project is still building its test technology to deploy its own version of DeFi. If successful, Polkadot and Kusama may repeat the success of Binance Smart Chain, which has expanded to host multiple new tokens and its own decentralized exchange, PancakeSwap.

Is KSM a Potential Long-Term Investment

The KSM asset is accessible through the Ledger wallet app, as well as Math Wallet. The Kusama network is still considered a test, so the asset value may shift over time.

For now, the long-term success of KSM is uncertain. The success of the asset hinges on the building of new networks, and on the launch of the Polkadot main chain.

In the short term, KSM reveals there is still sufficient exuberance on the crypto market, and funds are looking for altcoins that outperform.

Polkadot is also an uncertain long-term proposition. The project, however, is encouraging in its attempt to build a scaling solution for cross-chain transactions. Polkadot is notorious for losing most of its ICO funds, when an inexperienced user locked all the raised ETH by killing a smart contract.